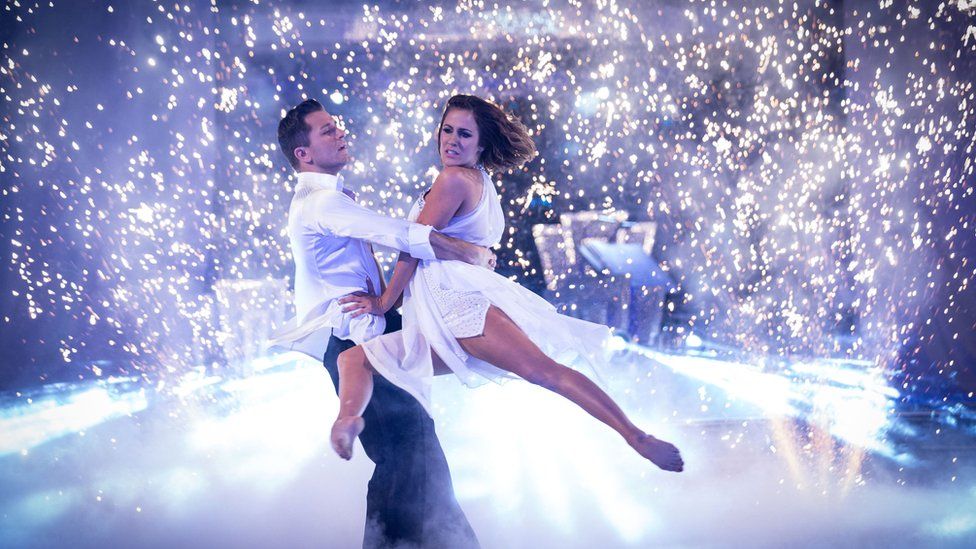 The death of TV presenter Caroline Flack exposed the toxic culture of social media and prompted a national focus on mental health. At the dance school where she trained as a teenager, lessons in wellbeing have become part of the timetable.

At the impressionable age of 16, Caroline Flack auditioned to join the Body Work dance studio in Cambridge.

The skills she honed here would eventually see her lift the Strictly Come Dancing glitterball trophy in 2014.

But the TV star's obvious talent and confidence in front of the camera belied the mental stress and pressure she faced behind the scenes.

The staff at Body Work recognise that pressure, and the school now has a dedicated head of wellbeing. 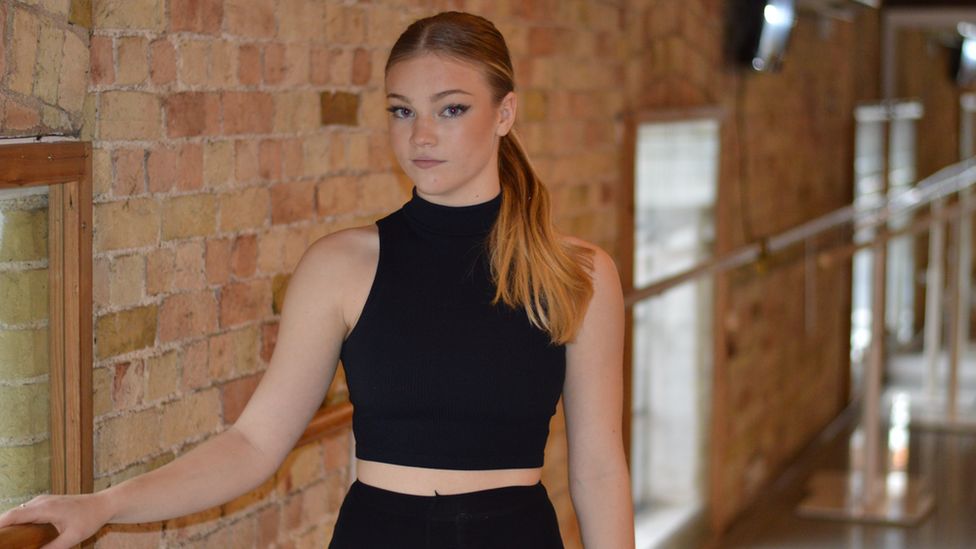 Mia Nicholson, 19, is a third-year student at Body Work, training to be a professional dancer.

"If I wasn't able to dance, I think I'd feel really lost. Without it I'd be pretty empty," she says.

"I have suffered from panic attacks - especially if I'm in a really stressful, overwhelming situation. That one day that goes completely wrong - and you just explode.

"We are in a mental health pandemic because I don't really believe that it's been addressed.

"Way more needs to be done in order to protect young minds."

When Ms Nicholson spoke to her GP about her anxiety and panic attacks, she was told she had depression.

"Panic attacks are terrifying - like someone has just robbed you of all the oxygen in the air. Your mind feels infected."

Data from NHS Digital shows the rates of mental health disorders among 17-19-year-olds has risen from one in 10 to one in six in the last five years.

Social media, Ms Nicholson says, has had a "massive impact".

"You can compare yourself to the whole world - and that is quite terrifying for someone who's just joined social media at the age of 13."

She describes the wellbeing classes at Body Work as "a full stop in a day of madness". 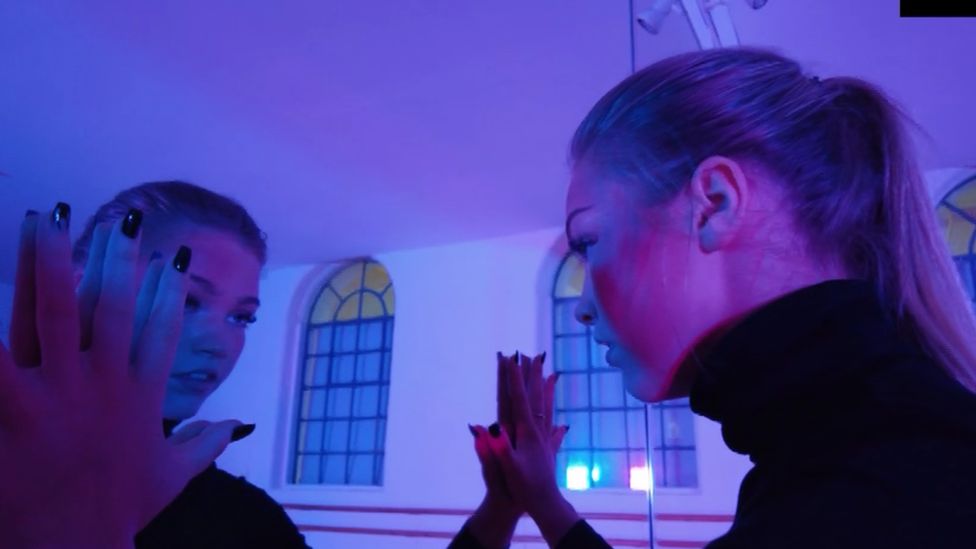 Mia Nicholson: "I suffer from body dysmorphia - I'm in front of a mirror, all day every day"

Emma Kerr is a teacher trained in mental health, and head of wellbeing at Body Work.

Students are taught mindfulness, yoga, talking therapy - and coping techniques, such as breathwork.

"The aim is to counterbalance everything else they do, not only in their training but in their lives; to let go of pressure, judgement, expectations," she says.

"The really frustrating and often saddening thing is to see how difficult it is to access services," she says.

"My hope is that all schools, colleges and universities are able to provide what we provide here. If it was everywhere it would make a massive difference." 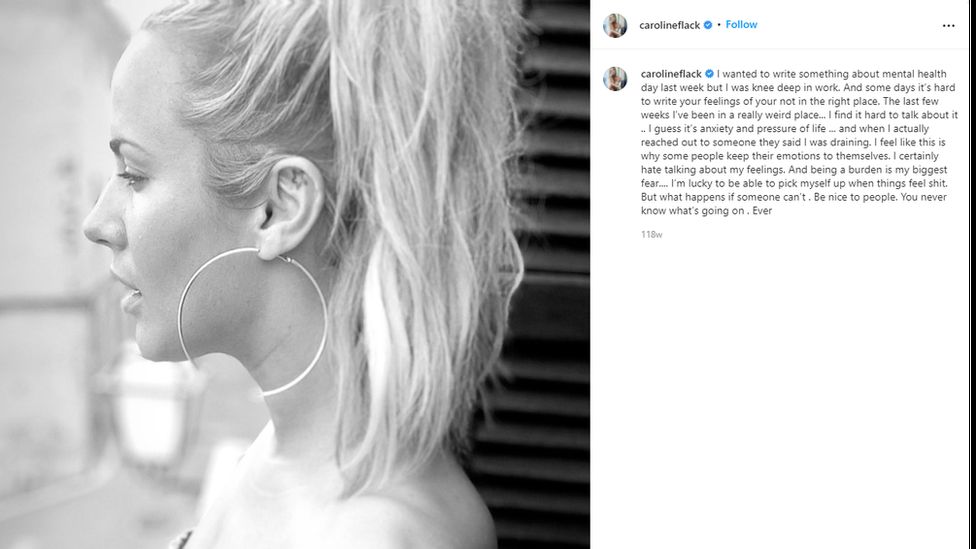 In an Instagram post to mark World Mental Health Day in 2019, Flack spoke of the "pressure of life"

In October 2019, marking World Mental Health Day, Flack, who grew up in Norfolk, opened up on social media about the "anxiety and pressure of life".

The star had faced immense scrutiny in her private life and feared press intrusion as her mental health deteriorated.

"The last few weeks I've been in a really weird place," she wrote.

"Be nice to people. You never know what's going on."

She says Flack had successfully auditioned for a place at the age of 16 and attended the school between 1995 and 1998.

"She was a fresh-faced young dancer - with a great voice," she says.

"She had normal anxieties that any of the students would have but she was supported. She lived with one of our teachers."

On her death, she says: "It issued a real warning note about fame and about social media.

"The main aim is for students to train for the profession in dance or musical theatre. The problem is now dancers, singers, actors - they do have to promote themselves on social media."

Training is more careful these days, she says, "physically and mentally". 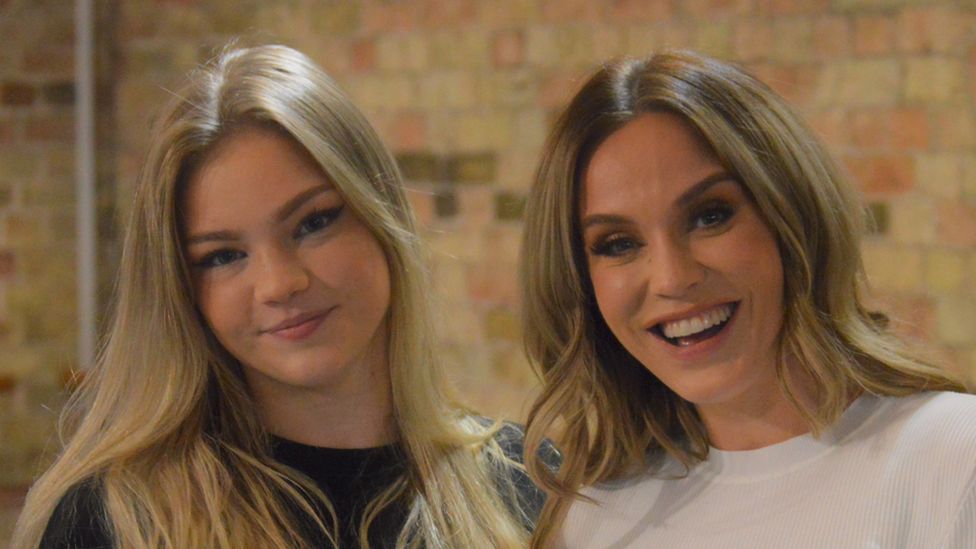 In 2020, weekly wellbeing sessions were added to the Body Work timetable, allowing students the chance to take time out and talk openly about their anxieties.

TV personality Vicky Pattison - who has five million Instagram followers - met a group of young women at the school to talk about the influence of social media, and her experiences.

She says the dance studio is "blazing a trail" in providing mental health care to students.

The girls talk of "acne apps" which remove skin imperfections in a bid for the perfect selfie.

"They don't realise that you had a hairstylist, a make-up artist, a photographer, and some great lighting just to get that one cute candid snap.

"And when they can't emulate it they feel bad about themselves. That's not a culture I want to perpetuate."

Ms Nicholson now has regular chats with head of wellbeing Ms Kerr about her feelings and worries.

"You can just reconnect with yourself, you can leave all your baggage at the door, come in and focus on something you love."

We Are England launches at 19:30 GMT on 26 January on BBC1 and is available on iPlayer

More on this story