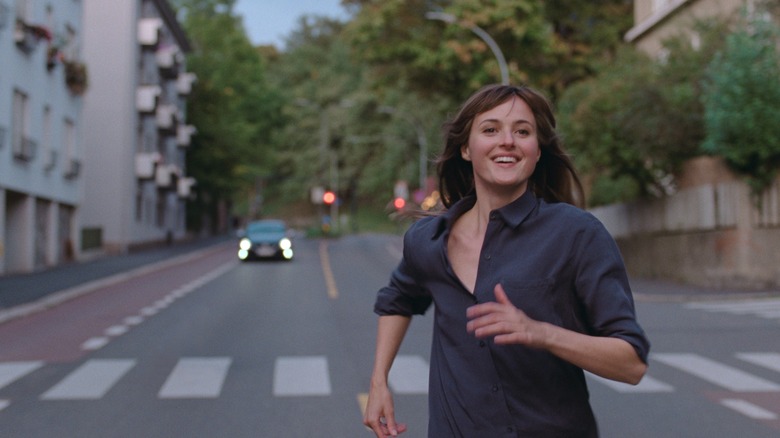 How's it been talking about this movie? I ask because there's so much a person could takeaway from it.

Yeah, because everyone also has such a personal relationship to the movie and they see themselves so much. Which is great, which is what we want. It's an endless well of conversation about love and life. It's funny because I had one person in a QA, we did a Lincoln Center screening and he asked me, "How do I fix my life?" I said therapy. And I met him now, two days ago. He was in the screening, in Lincoln Center again. And he said, "I started therapy."

[Laughs] Yeah. So funny. I loved being on set with this movie just because I was surrounded by these themes and these questions. I had great people to talk about it with, my co-actors and the crew, and so many wonderful people. I have great questions that I don't know the answer to, but it's great conversation all the way.

From the beginning, what were some of your questions when you first read the script?

My questions were ... I didn't know really how to do this role because she was so complex, and that's very rare. Usually, it's very clear who she is and what's the function of that role, and the script is more plot-driven. [This] script really, really struck me, but I was unsure of how to navigate within it. And then I had these great conversation with Anders and he had the same experience. We said, "Okay, so it's not about the characters in the same way we're used to. It's about the dynamic between the characters, and that's going to be the most important thing." So we've really built a lot of trust, we went on trips and we had these games where we would say what we were most ashamed of in life. So that we would get really close to each other. We kind of just let ourselves go into the themes of the script on set and ask questions. We're there in the moment. But that was my first question, "How do I do this?"

The role was written for you, right?

Was one of your questions for Joachim, "What qualities are you looking for that made you think of me for this role?"

"What do you think I am?" [Laughs] No, I was really flattered because I love that character. I think Joachim didn't take only from me, but it's that sense of not accepting yourself, not being really comfortable in being yourself all the time. And then trying also to take choices from something exterior and not really staying in those uncomfortable feelings or taking what you want really seriously. You have to be kind of forced into the opposite, to take choices from what actually makes you happy. And the only way to be forced into that state is going through some big losses and some big chaotic periods, where you resign and lose everything. I think that's very true, and I know Joachim knew that I had been through a lot of big existential turnovers. Is that a word even? [Laughs]

[Laughs] I think so. It works.

Yeah, you understand what I mean. And really, I had, on the other side, found more just acceptance in being myself. I could kind of rest in myself. So, yeah, that's probably the first big things I took from it.

It's great to watch Julie's growth in that sense, like in the breakup scene where she very clearly expresses herself.

Yeah. I really fought for her to be a strong character in the sense that — Askel felt he was more strong in that relationship because he could put things into words and analyze things. He's very sure of what he wanted, but I wanted her chaotic state of mind to be a strong place to be, because that's where you have to start. You have to be really vulnerable and really search, and be in that uncomfortable place to even start knowing who you are and what to do in life.